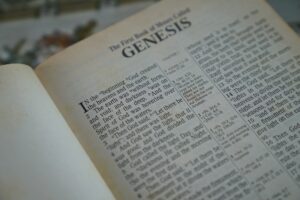 In the last year I’ve had a few conversations with lost people in which the apparent contradictions of Genesis 1 and 2 were used as examples of errors in the Bible. The accusation was made that the Bible contradicts itself; therefore, it’s a book like any other containing errors. As such it is neither true nor trustworthy.

On the surface Genesis 1 and 2 appear to contain discrepancies. This is called antinomy and occurs elsewhere in the Bible. For example, Proverbs 26:4–5 says, “Answer not a fool according to his folly, lest you be like him yourself. Answer a fool according to his folly, lest he be wise in his own eyes.” This presents a seeming contradiction; however, careful thought uncovers the solution. The first injunction warns against stooping to the level of the fool by adopting his tactics. The second injunction promotes correcting the fool lest he become hardened in his ways.[1] These two related commands go together. What appeared to be contradictory statements complement one another. So it is with Genesis 1 and 2; the two accounts complement one another.

Keep in mind the narrative structure.

The account of Genesis 2 functions the same way. This is the first section in the body of the book. The heading in 2:4 reads, “These are the generations of the heavens and the earth when they were created, in the day that the LORD God made the earth and the heavens.” This section will follow the storyline of the offspring of the heavens and the earth.[2] In other words, the narrative that follows traces the storyline of the dust from the earth, that is mankind. Adam was formed of dust from the earth. This is his story, a man who had no parentage in the normal sense. This is the story of his beginning and his fall.

Genesis 2 is misrepresented as a second creation account. However, Genesis 2 isn’t interested in telling us how the world got here. Genesis 1 tells us where the cosmos came from and how it was made. The account begun in Genesis 2 tells us where sin came from and how mankind’s relationship with God was severed. It tells us about the gritty origin of mankind and man’s relationship to woman. Contrary to popular belief, Genesis 2 intends no second, contradictory cosmogony. Genesis 2 narrows its focus to the Garden of Eden on the sixth day. Putting Genesis 2 in its proper context eliminates apparent discrepancies.[3]

Timing of the creation of plant life

Genesis 1 says that God caused vegetation to sprout on the third day of creation (1:11–13), but 2:5 reads, “When no bush of the field was yet in the land and no small plant of the field had yet sprung up—for the Lord God had not caused it to rain on the land, and there was no man to work the ground.” Does Genesis 2:5 contradict 1:11–13? Were there plants on the earth at the time of Genesis 2, or not?

Repetition of the creation of man

Genesis 1 records the creation of mankind (1:26–27), yet 2:7 says, “then the Lord God formed the man of dust from the ground and breathed into his nostrils the breath of life, and the man became a living creature.” Why the redundancy? Is this a second, contradictory account of the creation of man?

Timeline of the creation of animals and woman

According to the sequence of Genesis 1, birds were created on the fifth day and land animals were created before man and woman on the sixth day (1:24–27). However, 2:19 says that God created “every beast of the field and every bird of the heavens” for man to name after man was formed from the dust (2:7). Then, following the formation of animals for the purpose of naming, God made woman (2:22). Does this sequence contradict the order laid down in Genesis 1?

As we begin to resolve these apparent contradictions, let me first say this. For centuries and millennia God’s people saw no discrepancy between Genesis 1 and 2. I think this is a significant point. Moses made no attempt to harmonize Genesis 1 and 2 because, in my opinion, he saw no inconsistencies in them. Even if one denies Mosaic authorship and believes that an editor complied the text from various sources, it’s extremely unlikely that such an editor would stitch contradicting accounts together, especially containing contradictions within the span of a page or two.[5] The more sensible way to approach the text would be to assume unity and coherence and to take careful notice of each detail. The details will provide harmonization.

Timing of the creation of plant life

Setting the scene, Verses 5 states that a few plant species are missing, not all plant species. On the third day of creation God made, “plants yielding seed, and fruit trees bearing fruit in which is their seed, each according to its kind” (1:11). In other words, these are plants that self-reproduce through seed and need no cultivation. The kind of the plants identified in 2:5 are different than those of Genesis 1 (שִׂ֣יחַ הַשָּׂדֶ֗ה and עֵ֥שֶׂב הַשָּׂדֶ֖ה). The difference in terms indicates different species.

The key for identifying these plants lies in the parallel verse, Genesis 3:18, and the correlating reasons given for their absence at the end of 2:5. Following mankind’s sin and the fall, Genesis 3:18 reads, “thorns and thistles it shall bring forth for you; and you shall eat the plants of the field.” The two kinds of plants referenced in this verse parallel the plants referenced in 2:5. This indicates that shrub of the field is a particular kind of thorn or thistle.[6] The shrub of the field was absent in 2:5 because the ground had not yet been cursed. This also reveals that small plant of the field refers to that which is edible and cultivated by man. Following the curse of the ground mankind was consigned to hard, frustrating labor to generate food from the earth. The earth would no longer yield its strength and bounty. Mankind would eat plants (עֵ֥שֶׂב) of the field, equated with bread in the next verse (3:19), by the sweat of his brow.

The reasons supplied for the lack of these plans in 2:5 are as follows: “for the Lord God had not caused it to rain on the land, and there was no man to work the ground.” This leads us to believe that the shrub of the field (שִׂ֣יחַ הַשָּׂדֶ֗ה)grows wildly in the ANE and is irrigated by the rain (This noun appears also in the Hagar story in Gen 21:5, “When the water in the skin was gone, she put the child under one of the bushes.”). This kind of plant accords with the classification thorns and thistles (irrigated by rain, grows wildly, and needs no cultivation). The absence of a farmer reinforces the identification of small plant of the field (עֵ֥שֶׂב הַשָּׂדֶ֖ה) as wheat/edible crops. These plants need cultivation as opposed to those that sprung up on the third day (1:11–13).

In light of the narrative structure, this is very sensible. Genesis 2 and following (the generations of the heavens and the earth) answer the questions, “What happened to the human project? What happened to God’s very good world?” Genesis 2 begins to answer that question, and as Genesis 2 sets the stage we are informed that at that time there were no thorns neither was man exerting strenuous, frustrating labor for the wheat of the ground.[7]

The repetition of the creation of man

We have already addressed this discrepancy indirectly. Essentially, Genesis 2 is a close up of the sixth day, which occurred in Genesis 1. Genesis 1 summarized day six on which man was made, and Genesis 2 particularizes it filling in the details. Remember, Genesis 1 is universal in scope, and Genesis 2 is localized. Genesis 2 retells in intimate fashion the planting of the Garden of Eden and God’s relationship with man there.

Timing of the creation of woman and the animals

The account of the creation of woman closes out chapter 2 (2:18–25). This saga begins with God’s declaration of man’s need for a helper. After God states his intention to make a helper for man, 2:19–20 says, “And out of the ground the Lord God formed every animal of the field and every bird of the sky, and brought them to the man to see what he would call them; and whatever the man called a living creature, that was its name. The man gave names to all the livestock, and to the birds of the sky, and to every animal of the field, but for Adam there was not found a helper suitable for him.” In order to demonstrate for man his need of a helper God created some animals in the garden and brought them before the man for naming.

The animals are identified as every animal of the field (כָּל־חַיַּ֤ת הַשָּׂדֶה֙, undomesticated animals[8]) and every bird of the sky.  It’s telling that the livestock (לְכָל־הַבְּהֵמָה֙, domesticated animals) are not mentioned in 2:19 among the animals that God made for Adam to name (Genesis 1:24–25 does list livestock as one of the three categories of animals created on the sixth day.). However, verse 20 states that, “The man gave names to all the livestock, and to the birds of the sky, and to every animal of the field.” Presumably, the livestock/domesticated animals were already with the man in the Garden. The other animals (every animal of the field [wild/undomesticated] and every bird of the sky) were scattered over the face of the earth after their creation, so God created a localized group in Eden for Adam to name. In sum, the account refers to the localized creation of some animals for the purpose of naming by Adam.[9] This order does not contradict Genesis 1. As further reinforcement of this interpretation, the localized creation of some animals for the purpose of naming parallels the localized planting of trees in Eden (2:8–9a).[10] God causing specific trees to sprout in Eden on the sixth day does not necessarily contradict God creating trees on the third day (1:11–13). Remember, Genesis 1 is about the universe; Genesis 2 is about Eden.

Taking careful notice of details and understanding the referents of terms resolves the tensions between Genesis 1 and 2. These accounts are complementary, not contradictory. One tells us about the cosmos; the other tells us about a Garden. One answers where we came from, and the other answers what happened.

[5]“In 2:5–7 the reader is informed that when God created man there were no plants or shrubs. To begin with, if this is such a blatant inconsistency, why did the redactor do nothing to smooth it out?” (Hamilton, Genesis, p. 154). See also Green, Genesis, pp. 20–21.

[8]חַיָּה- “all kinds of animals, in most cases animals that are not domesticated, living in their own habitat”  (HALOT electronic ed., p. 310)

[9]Cassuto argues this view and makes the inference of the presence of livestock with man in the Garden (Genesis, p. 129).