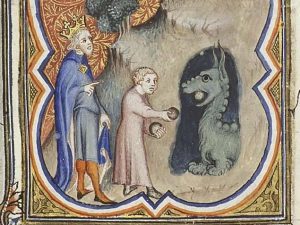 When I taught Old Testament Survey at a Christian University, one of my favorite assignments was having the students read Bel and the Dragon. This is a portion of apocryphal literature[1] which was written to be added to the text of Daniel (as chapter 14). I had the students read the account and then respond to it. Before continuing with this article, it may be worth your time to read it. Here is a link to the short text.

After reading the text, I would ask the students for their overall impression. I would also ask them to differentiate between this text and the biblical text. What is it about this text that immediately seems foreign to the rest of Scripture? Inevitably, I received the same sort of reaction that I have subsequently found even in scholarly literature. Consider the following statements:

Speaking in regard to the difference between apocryphal works and the NT, Metzger notes,

“It is here that there appears most sharply the difference between such documents and those of the New Testament. The apocryphal writings are, almost without exception, marked by a lush growth of legend to satisfy a craving for the spectacular and the marvelous. In the New Testament, on the contrary, the narratives involving the miraculous are characterized by a remarkable sobriety and chaste restraint.”

He goes on to note that the exclusion of such apocryphal works from the canon is not chiefly due to a church council, but rather, “The most cogent proof that these books are intrinsically on an entirely different plane from the books of the New Testament is afforded merely by reading them to tell their own story.”[2]

Or consider the comparison by Tom Bissell:

“To read any apocryphal work is to vacate a series of expectations. The first vacation is spiritual: However edifying these works purport or attempt to be, their noncanonical standing renders their message curiously distant from the expediencies of faith. . . . The second vaca­tion is formal: The gospels . . . have structure, contrapuntal detail, rhythm, and style. This helps them remain grippingly relevant to millions of people, most of whom know nothing about life in first century Palestine . . . Apocryphal works are not like this. They are sloppy, repetitive, frequently boring, often obscure, usually ugly, bizarrely circuitous, and typically build to moments of dramatic import baffling to all but the most cross-eyed sectarian. . . . One can certainly become sick of reading the gospels, but one never really tires of them. The optimal reading of an apocryphal work, on the other hand, typically requires a morning cleared of any pressing commitments and a soundproofed room.”[3]

If you read Bel and the Dragon, don’t these criticisms ring true? One striking difference I find between apocryphal literature and Scripture is the role of “hero.” Throughout Scripture, there are a number of significant and gifted people, yet the hero of each story is God. When you read Bel and the Dragon, however, it is quite clear that Daniel himself is the hero. He is the one who, of his own strength, devises the plan to foil the enemy.

In the end, the difference between Scripture and the books which were excluded is not merely the church’s decision for inclusion. Instead, it centers on the content of that literature, which either does or does not give evidence of divine inspiration. God’s people, recognizing such signs, have embraced the canon and rightly rejected the apocryphal works.

[1] Though some definitions may vary, I speak of apocryphal literature as that which is written to be understood as biblical literature, but is of doubtful provenance and is not included in the canon of Scripture.