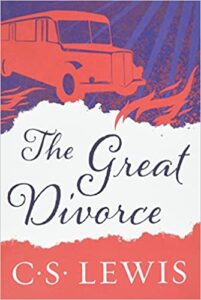 * Note this is a two-part series. The first part details my theological reservations about the book. The second details some of the insightful elements a discerning reader may nevertheless gain from the book.

C.S. Lewis was a master of imagination. Most Christians first experience Lewis with either his apologetic work (Mere Christianity) or his fictional literature (Chronicles of Narnia). The Great Divorce[1] might be considered Lewis’s best attempt at a bridge between the two (apologetics and fiction).

For those unfamiliar with the work, it is an imaginative exploration of life after death. People in hell board a bus to head toward heaven. Many fail to get on the bus, but others do make the journey. Most who arrive fail to stay for various reasons, and in Lewis’s depiction, it is always their choice to make. The genius of the book is the characterization of people and the reasons they would rather remain in hell than go into paradise.

In the introduction, Lewis warns the reader not to take his imaginative descriptions seriously:

“I beg readers to remember this is a fantasy. It has of course—or I intended it to have—a moral. But the transmortal conditions are solely an imaginative supposable: they are not even a guess or a speculation at what may actually await us. The last thing I wish is to arouse factual curiosity about the details of the after-world” (1).

Of course, some of the imaginative elements are clear. I don’t think Lewis believed people in hell would be boarding busses to visit heaven. But did Lewis believe that “hell is a state of mind” in which a person is given over to himself and thus is imprisoned in “the dungeon of his own mind” (62)? Certainly people after him believed he thought this, and they have embraced his approach. For them, hell is no real place; it is the prison of one’s own invention.

That his portrayal is intended to be more than mere imagination is revealed in the discussion the protagonist has with George MacDonald,[2] one of the heavenly beings. The protagonist has witnessed several souls deciding between going back to hell or staying in heaven. If they go back, they have decided for hell; if they stay, then their experience in “hell” was just Purgatory.

The protagonist then asks,

“But there is a real choice after death? My Roman Catholic friends would be surprised, for to them souls in Purgatory are already saved. And my Protestant friends would like it no better for they’d say that the tree lies as it falls.”

“They’re both right, maybe. Do not fash [worry] yourself with such questions. Ye cannot fully understand the relations of choice and Time till you are beyond both” (62).

Later in the volume, the protagonist asks George Macdonald, who was a universalist while alive, about his present views on universalism. MacDonald’s answer is quite ambiguous:

“Ye can know nothing of the end of all things, or nothing expressible in those terms. . . . If ye put the question from within Time and are asking about possibilities, the answer is certain. The choice of ways is before you. Neither is closed. Any man may choose eternal death. Those who choose it will have it. But if ye are trying to leap on into eternity, if you are trying to see the final state of all things as it will be (for so you must speak) when there are no more possibilities left but only the Real, then you ask what cannot be answered to mortal ears” (121).

While Lewis may claim that we should not press his allegory too far, such a conversation seems to clearly present what Lewis himself believed. Such a paragraph helps us understand why universalists and those who deny universalism both accept this volume—Lewis is ambiguous. He seems to claim that though, in this time, some will choose their own damnation, yet in the future, it is possible that things will be different, and all will be redeemed.

Inevitably, Lewis’s imaginative portrayal reveals his theological foundations. His initial warning that people not take it seriously cannot be taken seriously. Does this relegate the work to the trash bin? For lesser writers, it would. But even in this theologically suspect allegory, there are reflections of truths stated in powerful and provocative ways. In my next blog article, I will seek to expose those gems of wisdom.

[1] I have always appreciated the name of the book. Though Lewis nowhere in the volume explains the origin of the title, it appears quite clear that he referred to the separation of a man from God as a “Great Divorce.” The analogy is suggestive and rich with implication.

[2] George MacDonald was a writer who played a significant role in Lewis’s life. There are two lengthy portions of the book where the protagonist and MacDonald have extended discussions about the nature of future judgment and bliss, and these seem to be less imaginative and more explorative of Lewis’s actual thoughts on the matter (chapters 9 and 13)